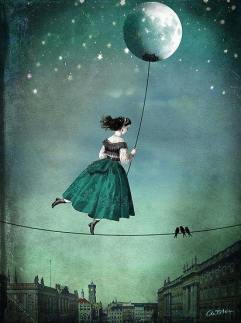 I don’t speak German and have only rarely been tempted to learn, but there are certain German words that are so deliciously evocative that I simply fall in love with them.

Weltschmerz for instance — and if you can find a better word for that particular feeling I’d love to hear it — or gemutlich — “More tea?”— and my favourite of all seiltanzer, meaning tightrope walker or even better rope dancer.

In English the term tightrope walker triggers a purely mental process in which the mind after some fiddling around generates a mental picture. Rope dancer is marginally more visceral, whereas, say Seiltanzer and there you are in perfect kinesthetic balance looking down into the abyss.

I first came across the word during a period of intense reflection on my creative process while I was working towards my Masters in Writing.  It came to me as the name of a poem by British poet and academic Peter Abbs.

If on the road you should meet Socrates –
And fail to kill him,

Then avoid his ironic eyes,
His enticing invitations,

Teasing aporias: Refuse to shake his hand,
Decline the olives and the wine.

And not a word in answer to his questions.
The smallest concept

Sparks the engine of his mind, that machine of refutation
No-one survives

Then, if he should pester you, be brave
And simply dance.

Let your body rise before him,
Every gesture conjunctive, assertion of your blood,

Your breath, your life,
Your death. An acrobat child dancing on the grave,

A self propelling wheel, a yes and (again) a yes.
Then without a pause, pass on:

The juggling tightrope walker seemed to encapsulate the very essence of what it is to be in the creative zone. Perfectly centred and cool all the while juggling the many different elements that must be fitted into the final offering.

And then there’s Roland Barthes idea of the Death of the Author which, it seems to me fits very nicely in here somewhere. I’ll get back to that sometime.

As soon as a fact is narrated, no longer with a view to acting directly on reality, but intransitively, that is to say finally outside of any function other than that of the practice of the symbol itself, this disconnection occurs, the voice loses its origin, the author enters into his own death, writing begins.