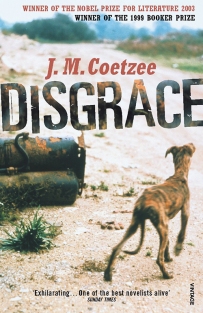 J M Coetzee’s Booker Prize winning novel Disgrace while perhaps not quite as grim as its predecessor The Life and Times of Michael K, also a Booker Prize winner, has nothing of the light and fluffy about it. Set against the backdrop of post-apartheid South Africa, it depicts the fall into disgrace of a middle-aged, white university professor.

Professor David Lure is a man who uses the heroic myths of the past to maintain the apartheid in his own soul. His exposition of Lucifer in his lecture on Byron’s Lara depicts the fallen angel as acting from impulse and incapable of loving or ultimately of being loved and is used by him as a way of steeling himself to fend off a young student he has seduced and raped and who is starting to be a nuisance to him.

In order to maintain his Byronic stance Lure must remain inured to the implications of passivity in others; seeing only how it fits with his own desires. He forces himself on the student he has previously seduced, and “She does not resist. All she does is avert herself. Not rape, not quite that, but undesired, nevertheless, undesired to the core.” Overcome with dejection and dullness, he can hardly move but the best he can come up with is that it was “a mistake, a huge mistake.”

The student brings charges of sexual harassment against him and it is not his pleading guilty to the charges but his refusal to display any remorse (echoes of  Camus’ The Outsider), that gets him dismissed and leads to a series of experiences which allow him to experience, close up, enforced passivity and otherness.

The style of the novel is lean, sparse and so in tune with the subject matter that one scarcely notices it. (Salman Rushdie called the language ‘bone hard’).

Disgrace is written in the limited third person from Lure’s point of view allowing us full fascinating access to his inner world. He is not at all a sympathetic character but because of the intensity of our exposure to his inner world it is impossible not to identify with him. The point is that he is about as honest as he can be according to his privileged white background and it is precisely his acknowledgement and acceptance of his blind spots that precipitates his downfall.

So does Coetzee provide us with a ‘satisfying’ conclusion in which our hero emerges redeemed and cleansed by his experiences of ‘the world of breathing’, the real world, ‘the world we share with animals’? No such easy solution is provided, but Lure has increasing numbers of ironically expressed insights into himself as the novel progresses.

“Let her gaze her fill on her Romeo on his bowed shoulders and skinny shanks,” is what he thinks after a less than romantic encounter with a woman he considers ugly.

The changes in Lure are reflected in the different drafts for his opera Byron in Italy. The hero is finally removed from the libretto altogether and his now dumpy middle-aged heroine calls his wraith up by singing out the window to the accompaniment of a banjo. Lure has found comedy and we feel by extension a sense of humour about his own heroic strutting.

Initially introduced as ‘reversals: the stuff of bourgeois comedy”, the theme of reversal recurs over and over again in the novel, epitomized at the last by Lure’s voluntary work at a clinic where unwanted dogs are put down and his relationship with the woman who runs the clinic. A woman Lures sees as profoundly physically unattractive, but with whom he has an affair.

“He and Bev do not speak. He has learned by now, from her, to concentrate all his attention on the animal they are killing, giving it what he no longer has difficulty in calling by its proper name: love.”

This novel is profoundly realistic both at a psychological level and at the level of historical allegory. The more I read of it, the more I saw in it and will continue to see in it with further readings. In review it has been possible only to scratch at the surface, like one of Lure’s dogs, when what I really want to do is transmit it holus bolus into your head crying “See! See! Now this is a story.”