Sea of Poppies is the first  part of the Ibis Trilogy by multi-award winning writer Amitav Ghosh.

Ghosh’s  works have been translated into over 20 languages which isn’t  at all surprising if Sea of Poppies is anything to go by. It is the sort of novel that tempts one to let the dishes pile up in the sink and leave the phone on flight mode.

At first I was a tad irritated at the lack of a glossary explaining Ghosh’s frequent use of the ‘pidgin’ words and euphemisms common in British India. However, once I surrendered to it, I found that it doesn’t actually interrupt the flow of the narrative to come across these unfamiliar words, and indeed it enhances the feeling of being immersed in a country where many strange and wonderful dialects and languages exist side by side.

Ghosh is a masterly story teller interweaving his characters life stories in such a way that we get to know each one individually and intimately before they come together on the Ibis, a former slave ship now being used to transport indentured workers to Mauritius.

The practice of indentured work, in this instance,  was simply a continuation of the slave trade under a different name. Huge numbers of peasant farmers had been enticed – or forced – to give their land over to growing opium poppies for the East India Company. They had gradually been reduced to poverty and even starvation by the consequent rise in food prices and by their lack of bargaining power, which meant the East India Company could pay whatever they felt like for the product. This meant that in many families one or more members had no option but to sell themselves into servitude in the hope of finding a better life across  “the black water” or in a desperate attempt to lift the rest of their family out of poverty. 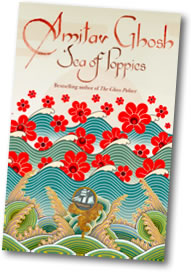 The story is set at a time when the East India Company was still running India for its own commercial gain with the support of the British armed forces, but with very little interference by the British Government. Ghosh’s characters are not one dimensional, even the nastiest of them is understandable, and while he paints a picture of the East India Company as rampantly corrupt and exploitative he also shows how deeply complicit were the Uppercast Indians, by this stage at least.

The characters who come together on the Ibis are many and varied, some grow and transform by allowing their humanity to overcome the blindness and prejudice of the system that entraps them, some don’t and come to satisfyingly grisly ends. Interestingly there is one character Zachary, who leads a bit of a charmed life anyway, who really doesn’t seem to grow much at all. He’s basically a fairly decent human being but is pretty determined to make his way up the ladder in a very corrupt system.  I suspect he will be featuring largely in the next two novels in the series and that his journey to self-knowledge may provide the backbone of the series.

Sea of Poppies plunges the reader into 19th Century India by the power of vivid description and by its compassionate understanding of the subtleties of human nature. Although it describes vividly man’s inhumanity to man it is ultimately a joyful and uplifting experience, illustrating as it does, the possibilty of overcoming evil through the transforming power of  love.